Welcome to our 12th annual Advent Calendar! We're celebrating anniversaries this year, with 40th, 50th, 100th and 150th all making an appearance. If it's a special anniversary Christmas for you this year, why not let us know?

Maybe you've been getting things ready this weekend, like we have. No tree yet, but we certainly have bought a lot of party food! Our greatest find was at Carluccio's, which has just opened in Woking. We missed them last year, but we have this year's cream of the almond crop, it's the delicious Ricciarelli: 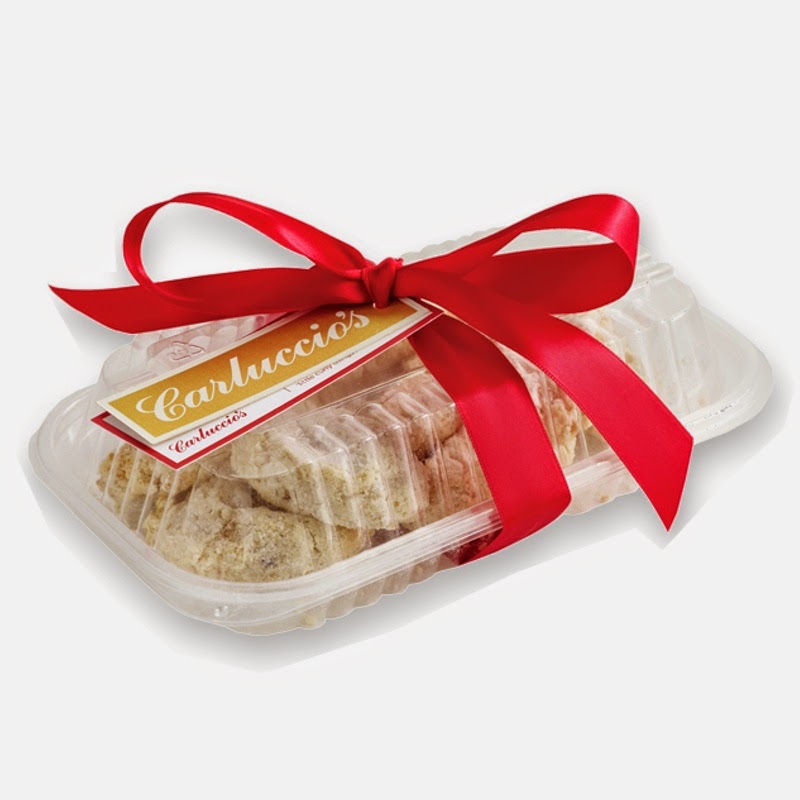 What have you done to get ready for Christmas? Let us know in the comments. And of course, tell your friends about this Advent Calendar. The quick link is: bit.ly/adcal2014
2 comments:

With visits to the cinema becoming few and far between (ironic given the Year of Film in 2003-4 where winning an unlimited cinema pass meant over 50 visits) I wanted to mark the latest blockbuster I've seen on the big screen. It's all about spectacle not subtlety, and is the third in what I call the Space Trilogy:


Where the first of these was fatally marred by unscientific behaviour, and Scott not leaving his earlier greatness well alone, the second was like a road movie in the same way that Hanna was, with less emphasis on the science and more on the journey (physically and emotionally). Now Nolan (and Nolan) have their own space epic to promote, and they take a third route, that of explaining the metaphysical power of love.
Spoilers abound, as there's no way I can write a review without talking about the plot.

HATHAWAY
I thought it was a particularly neat trick to give McConaughey a daughter who looked like a young Anne Hathaway, so that viewers who had already heard that characters would get a lot older, would see the girl and imagine her as an adult. But then the rug was pulled from under us, Hathaway is Michael Caine's daughter. At least that's what we are meant to believe. Right until Jessica Chastain appeared, I was sure this would be a cunning Nolan twist.
But no, Hathaway is a tragic wide-eyed scientist, pining for her planet-bound love interest. Along with the equally wide-eyed Amanda Seyfried, I find Hathaway a tiresome actress who runs the full gamut of emotions, from A to B (as Dorothy Parker once said about Katherine Hepburn). There are too many close-ups of her face, and she's sure to win the Oscar for Big Eyes again.

BURSTYN
How clever to have Ellen Burstyn as the first person who appeared in the When Harry Met Sally-style interviews that appeared at the start to frame the Dust Bowl story, and therefore the first person in the final credits. Nolan had seen Ken Burns's documentary The Dust Bowl (2012) and wanted to use some of the interviews from that film. So when we see the much-older Murph at the end of the film, we get a sudden flash of recognition.

MUSIC
In space, no one should be able to hear the strings. But the problem that Interstellar shares with Gravity is a need to fill the silence, and overpower the visuals with intrusive and repetitive orchestral motifs. Hans Zimmer (who I'm contractually obliged to remind you wrote the theme for Going For Gold) takes up Steven Price's baton and provides driving themes that are even more exhausting than the action they underscore.
Whether it's driving a truck through fields of corn, synchronizing rotations with a runaway Endurance, or some other nail-biting scene, the sense of relief when the music ends matches ‎Matthew McConaughey's exhaustion at having jumped through another hoop on the way to the future of the human race. I just wish Nolan (and Cuarón) had had Kubrick's vision to let space speak for itself.

TECHNOLOGY
The sudden appearance of NORAD when the secret space program is revealed was a great filmic reference to Wargames (1984) with its super-computer WOPR. And when the monolith-like TARS and CASE appear with their 4-letter names, and their slightly-unbelievable scraping/walking motion, we're expecting a double dose of HAL. I hope the Blu-Ray has a LOT more information on these two not-evil-at-all robots. They get the best lines as well.
TARS should appear in more films: link.

SCIENCE
Too much has been made of the Kip Thorne Black Hole invention (link). As anyone who's seen Disney's The Black Hole (1979) knows, bad things happen when you travel with a robot into a singularity. But they were going to have to go into it anyway, and if you can accept that they don't die being made into strands of spaghetti, the eventual 3D/4D/5D tesseract they arrive in fits pretty well with the ideas introduced in Abbott's Flatland.
I was also impressed by the explanation as to why a wormhole would be spherical not circular. So there, Stargate SG-1.

COP-OUT
So the only plot-hole I'm going to complain about is the 5-dimensional beings. If they can make everything else happen, couldn't there have been an easier way that didn't involve driving off cliffs, falling off cliffs, etc? If they can send information back through time, why not just do that? It reminded me of the Asimov concept of the Eternals (link) where humans in the future have shaped the past to ensure that their own existence occurs. It also reminded me of Bill and Ted at the end of their Bogus Journey, where they have to remember to do all the things they will have done in the future to ensure that De Nomolos gets captured.

Well, what were you expecting? Philip French or Mark Kermode? Hope you enjoyed my thoughts anyway.
No comments: