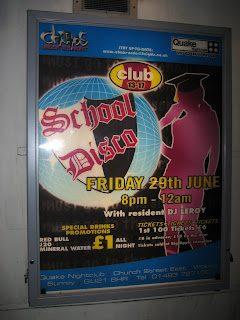 There are two completely different things called 'School Disco'. One involves middle-aged teachers wearily chasing smoking kids out of the loos back into a dimly lit school hall where Mr "DJ Tony" Clark plays a selection of modern choons and the boys sit down one side of the room and the girls the other.
The other is where mindless Lambrini girls (for girls read women in their 20s) off their heads and out of their clothes pretend their school uniform used to be a bra and netball skirt (and symmetrical freckles) and sexually harass men to the strains of Britney Spears.
Now a few years ago someone had the bright idea of letting under 18s have a proper club night of their own, with no booze and no drugs, but a decent atmosphere and a lot of fun. In Woking it's DJ Keith who did them at Quake, where I'd be innocently walking out of the car park and a line of 200 teenyboppers would scream 'Hello Mr Creen' at me.
Now Keith (or his sidekick DJ Leroy) has had the bright idea of running a School Disco ... but for teenagers. Why? Is he going to play hits of the 90s at them? Or is he going to get some of their form tutors to be bouncers?
I don't understand why people who are at school all day want to go to a club night where they pretend they are at school again?
No comments: This 'rid of old cassettes' thing is proving to be quite expensive. Another compilation I'd made from albums borrowed from the library (to be precise: libraries in Whitley Bay, North Shields, Newcastle, and to a lesser extent, Monkseaton and Tynemouth) was the best bits of T'Pau's two albums.

Be honest, all you really know about them is their single 'China In Your Hand', Carol Decker having the biggest and reddest hair of 1987, and the fact they are named after a Vulcan from Star Trek.

I certainly remembered them as being soft-rock a la Heart (These Dreams, Alone etc.) but when I started listening, every song not only seemed familiar, they had fantastic production, fantastic keyboards, and a fantastic variety of styles. And Carol's voice is so distinctive and powerful.

So on eBay I bought both of their albums and my recorded media collection has actually increased! But if you hanker after a nostalgic wallow, you can't do better than their first album, 'Heart and Soul'.
No comments: 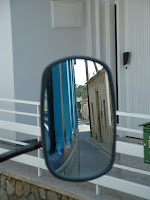 One of the drawbacks of being a classically-trained musician is that even the naffest rock music can hook you, just because it has slightly more of a harmony or a melody or whatever than the latest non-musical rap/dance/drivel that's going on in the charts. For example, my sister-in-law loves Yanni, and my brother thinks Jean-Michel Jarre is great.

I personally was impressed, sad to say, by the cod-opera stylings of Jim Steinman. He wrote all of Meatloaf's biggest hits, and two of Bonnie Tyler's - 'Holding Out for a Hero' and 'Total Eclipse of the Heart'. So I stuck them all together on a cassette that I then never played again.

I think I've grown out of 9-minute epics with wailing rock guitar and repetitive piano chords, but one of them struck me with its lyrics, that actually seem quite clever. The singer is recalling events from the past, the death of his best friend, parental abuse, and losing his virginity:

It was long ago and so far away, oh God, it seems so very far.
And if life is just a highway, then the soul is just a car.
And objects in the rear-view mirror may appear closer than they are.

It's a good metaphor, no?
No comments: 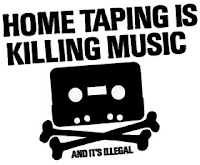 I'm tidying up the house, and working out what music I'll never listen to again. There's cassettes I've had since the late 80s that have moved with me 7 times in 20 years and I've never played them. What's sadder is that these are tapes I made, carefully selecting all of my favourite songs by an artist, and then sticking them in a box. So I'm working my way through them, one by one, and posting my farewells here.

The first one is 'Hue and Cry'. I had them roundly labelled as a Scottish band, so much so that the end of the tape has a couple of Proclaimers songs stuck on for good measure. The combination of a distinctive Scottish burr and jazzy arrangements redolent of Swing Out Sister make it a good listen, but it doesn't bring back specific memories, and it's only generically uplifting.

What should I do with these old TDK D90s (or for premium recordings, Sony SA90s)? I can't give my old mix tapes to a charity shop, burning wouldn't be environmental, and it seems a shame to just put them in the bin. Any ideas?
No comments: 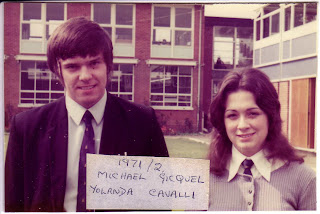 As archivist at school, I found a complete set of photos of the Head Boy and Girl from every year from 1971 to 1988. They look absolutely fantastic and show the changing fashions of the day.

This crazy guy has a style of reviewing movies all of his own. Half synopsis, half moral majority rant. Look out for his Sex and the City critique!